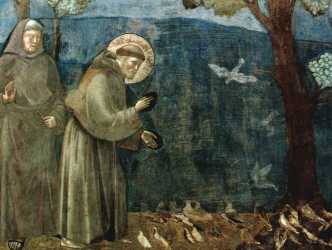 The Catholic church has had a complicated history with the animals. Through time, various positions on the relation Christians should entertain with the animals were upheld. The monastic order of the Cathars for example refused to kill any animal. They believed they contained some sort of human spirits. But as an institution, the Church in general did not have any problem with Christians killing animals. The fact of eating meat (any sort of meat) was even seen for a long time as way of proving someone was a “real Christian” (as opposed to a member of another religion with dietary restrictions – more on this here). Some Christian philosophers, as father Malebranche (1638-1715), went as far as depicting the animals as non-sentient beings that could be mistreated at will. All in all, the Roman Church has not been very concerned with the well-being of the animals and has usually defended a very anthropocentric vision of the world. Those of you who read the Genesis might understand why it is so:

« So God created mankind in his own image, in the image of God he created them; male and female he created them. God blessed them and said to them, “Be fruitful and increase in number; fill the earth and subdue it. Rule over the fish in the sea and the birds in the sky and over every living creature that moves on the ground (Genesis, v. 27 & 28) »

Stepping away from the purely anthropocentric vision of the Genesis was one of the goal of Pope Francis encyclical letter released a few a weeks ago. Aimed at establishing a clear position of the church regarding the environment, the 189 page long document offers four refreshing statements on the environment in general and on the animals in particular.

This is the most simple but most fundamental statement of the document. As mentioned above, at first glance, the Genesis is quite blunt in offering dominion of the earth to humankind. But the pope emphasises another verse of the Genesis that states that humans have not only “dominion” over the earth, but the obligation to “till and keep it” (Genesis, 2:15). This passage leads the Pope to repeatedly state that the classic anthropocentric position of the church was not a correct interpretation of the Bible:

“Although it is true that we Christians have at times incorrectly interpreted the Scriptures, nowadays we must forcefully reject the notion that our being created in God’s image and given dominion over the earth justifies absolute domination over other creatures (§67) (…) Modernity has been marked by an excessive anthropocentrism. Our “dominion” over the universe should be understood more properly in the sense of a responsible stewardship (§116)”.

This position is reinforced by the statement that the link between God and its creation does not exclusively go through humankind. The current pope sees every creature as having a relationship with God that humans must respect:

“ (…) we can add yet another argument for rejecting every tyrannical and irresponsible domination of human beings over other creatures. The ultimate purpose of other creatures is not to be found in us. Rather, all creatures are moving forward with us and through us towards a common point of arrival, which is God, in that transcendent fullness where the risen Christ embraces and illumines all things. Human beings, endowed with intelligence and love, and drawn by the fullness of Christ, are called to lead all creatures back to their Creator (§61).”

Second but very strong statement, is the obligation to not leave environmental stewardship to the forces of the market. This statement is the true antiphon of the encyclical letter. The idea is coming back every few pages sometimes very bluntly: “The environment is on

e of those goods that cannot be adequately safeguarded or promoted by market forces (§190)”. The reason is simple: “Caring for ecosystems demands far-sightedness” and “no one looking for quick and easy profit is truly interested in their preservation” (§ 36).

In fact the pope criticizes the “deified market” that has become the “only rule” (§56) and rejects as a “modern myth” (§78) the idea that material progress is unlimited. According to him, the environment in general is a common good that everyone should be able to share:

“The principle of the subordination of private property to the universal destination of goods, and thus the right of everyone to their use, is a golden rule of social conduct and “the first principle of the whole ethical and social order (§ 93)”.

THIRD STATEMENT – HUMANKIND HAS THE OBLIGATION TO PRESERVE EVERY SPECIES

After underlining the fact that humans must care for the earth and that the market is not a way to do it, the Pope makes a clear statement regarding the preservation of the endangered species:

“Each year sees the disappearance of thousands of plant and animal species which we will never know, which our children will never see, because they have been lost for ever. The great majority become extinct for reasons related to human activity. Because of us, thousands of species will no longer give glory to God by their very existence, nor convey their message to us. We have no such right (§ 33)”.

The pope even goes as far as expressing support or rejecting certain international mechanisms of species protection. He for example praises the CITES (§168) and its verification mechanism. He also favours the creation of biological corridors (§35) or sanctuaries (§37) but refuses the idea to internationalize the amazon “which only serve the economic interests of transnational corporations” (§38).

“(…) whenever he would gaze at the sun, the moon or the smallest of animals, he burst into song, drawing all other creatures into his praise. He communed with all creation, even preaching to the flowers, inviting them ‘to praise the Lord, just as if they were endowed with reason’. His response to the world around him was so much more than intellectual appreciation or economic calculus, for to him each and every creature was a sister united to him by bonds of affection. That is why he felt called to care for all that exists. His disciple Saint Bonaventure tells us that, “from a reflection on the primary source of all things, filled with even more abundant piety, he would call creatures, no matter how small, by the name of ‘brother’ or ‘sister’”.

This leads the pope to declare that “each creature has its own purpose” (§84) and that humankind has the obligation to “care of all creatures” (§156 & 244). According to him, God is alive in every creature (p. 179) and therefore, “Clearly, the Bible has no place for a tyrannical anthropocentrism unconcerned for other creatures » (§ 68). Consequently, the Pope states that animal experiments are only admissible when needed to caring or saving human lives:

“While human intervention on plants and animals is permissible when it pertains to the necessities of human life, the Catechism of the Catholic Church teaches that experimentation on animals is morally acceptable only “if it remains within reasonable limits [and] contributes to caring for or saving human lives”. The Catechism firmly states that human power has limits and that “it is contrary to human dignity to cause animals to suffer or die needlessly (§ 130).”

« our indifference or cruelty towards fellow creatures of this world sooner or later affects the treatment we mete out to other human beings. We have only one heart, and the same wretchedness which leads us to mistreat an animal will not be long in showing itself in our relationships with other people. Every act of cruelty towards any creature is “contrary to human dignity (§92)”.

These four statements represent a real change in the classic Christian doctrine regarding the animals. Still, one should not conclude that the Roman church is now considering all animals, humans and non-humans alike, to be equals. The pope makes it clear that all animals are not on the same level (§90), that human must prevail and have a unique dignity (§43 & 119).

Humans are depicted as the only ones able to modify their environment for useful purposes (§ 102) or to be intelligent (§83).

“Human beings, even if we postulate a process of evolution, also possess a uniqueness which cannot be fully explained by the evolution of other open systems. Each of us has his or her own personal identity and is capable of entering into dialogue with others and with God himself. Our capacity to reason, to develop arguments, to be inventive, to interpret reality and to create art, along with other not yet discovered capacities, are signs of a uniqueness which transcends the spheres of physics and biology. (…) The biblical accounts of creation invite us to see each human being as a subject who can never be reduced to the status of an object (§81)”.

The pope has changed the way the church defines the relationships humans and animals should entertain. It is certainly for the best when one takes the point of view of the animals. But his vision is still far from the kind of vision upheld, for example, in Indian philosophy:

«  The universe along with its creatures belongs to the land. No creature is superior to any other. Human beings should not be above nature. Let no one species encroach over the rights and privileges of other species » (Excerpt of the Isha-Upanishad as quoted in Animal Welfare Board of India vs A. Nagaraja & Ors).